Elements of a Business Letter

Major Elements of a Business Letter

Major elements of a business letter are something most humans and cats are familiar with. They are more or less the same in different countries. Dixie does provide some peculiarities pertaining to the use of major business letter elements, you can find them on the full block business letter page, together with a sample image of a letter that includes all of them (except for a letterhead).

Here Dixie would just like to list the links to them for you so that you could have a business letter outline in one place:

The above are parts of a standard business letter, and you could have professional business letters using just those.
However, you probably realize that sometimes it is not enough. That’s when you need

Dixie invites you to check out a fun game for practicing line spacing after each major element in a business letter.

Additional Elements of a Business Letter

These are more specific elements that you use only when you need them, some of them are even interchangeable. Never include all of them, Dixie warns. As always, use your own judgement in deciding which of them your letter can’t do without. In the letter below you can see most of them. 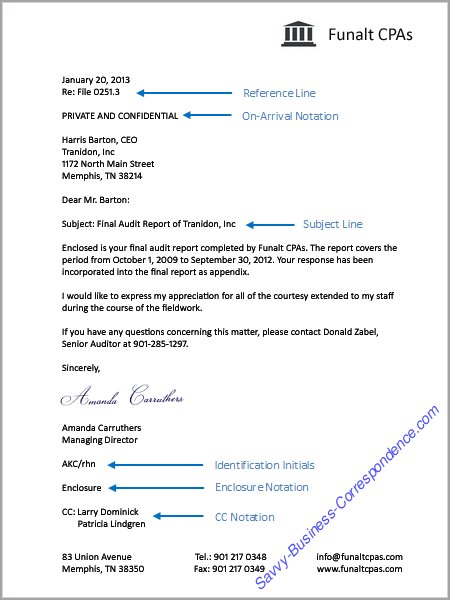 Some companies, especially big ones, Dixie says, have a system of tracking letters by chronological numbers, employee initials, department codes/numbers or whatever else they choose. This is what they put in the reference line. Or sometimes you can include the reference line in your letter to refer to the information specifically requested by the recipient, such as a job reference or invoice number.

The reference is typed on one or two lines, immediately below the date. This means it is typed to the right of the center in the modified block and indented business letter layouts. Dixie says you can also refer in the reference line to the letter you are replying to, if you wish. Examples of references:

The manuals on business correspondence recommend to type special mailing notations in all uppercase characters before the inside address if you consider them necessary in your letter. But you might prefer to have them less visible, your choice. Examples from the book:

You might want to include a special notation on private correspondence. This, Dixie says is also typed in all uppercase characters or you could prefer to bold them before the inside address (after the special mailing notation if you have included it too).
Others prefer to put it between the inside address and the salutation. Remember to put it on the envelope as well, which is probably even more important. Examples of private correspondence notations:

Dixie thinks that you can have different reasons for including an attention line in your letter. One of them could be wanting the organization to respond even if the person you write to is unavailable. In this instance, Dixie suggests you put the name of the organization or department on the first line of the inside address, and the attention line immediately afterwards:

Attention line can also include the name of the person, in this case you usually don’t type the person’s name in the inside address. Though if you have a reason for including it twice, Dixie wouldn’t mind too much. Below is an example of such simple attention line:

You might want to draw the immediate attention to the topic of your letter, Dixie thinks a subject line would look very professional in this instance; its proper place is below the salutation. Dixie would flush it left, and if you prefer to center it Dixie would like you to reconsider. It is good to have it brief, on one line. If you are typing a subject line you might want to skip a Reference Line. Example:

Dixie has even seen the letters with a subject line like this:

Re: Equipment Purchase versus Leasing

This is a merge of a subject line and a reference line, Dixie is sure you realize that if you put ‘Re:’ in the subject line you definitely need to skip the reference line (the one you would normally put below the date as Dixie described above).

In the old days when secretaries used to type letters for their bosses… Wait a minute, are those days so long gone? Or are they gone at all? Well, depends on the secretary’s luck, Dixie would guess. Or the size of the company. Or the type of the letter. Some bosses do prefer to type some letters by themselves and give others to their assistants.

Anyway, what Dixie meant to say is, in the old days the abbreviation 'p.p.' was used in the signature of the business letter. It stands for 'per pro' and means 'by one acting as an agent'. Dixie thought maybe you would like to know what those 'p.p.' stand for in some business letters.

When you see them it just means that the letter was not typed by the person who signed it, but rather by his/her assistant whose name follows 'p.p.' like this:

There is another way of putting it: the person/cat who typed the letter for the boss first includes three of the boss’s initials in uppercase characters and then two of his or hers in all lowercase characters, avoiding ‘p.p’ which is becoming so rare many humans don’t even know what it is. The signature block in this case would look like this (note that Howard Lindham’s middle name is Kenneth, and his assistant's name is Mary Raynor):

Dixie touched upon enclosures in her modified block business letter example. Enclosure notations can look like this:

or you could include the actual description of the enclosure/enclosures:

When you have several enclosures you can include them in the letter like this:

Students often ask Dixie what 'CC' in the email stands for and Dixie tells them that 'CC' can be part of a business letter as well. When asked about 'CC' Dixie immediately pictures in her mind carbon paper that was very widely used for making copies not so long ago. Carbon paper is on the way of disappearing but it looks like 'CC' from ‘carbon copies’ will remain in business correspondence for a long time.

A lot of humans and cats nowadays prefer to state that 'CC' means ‘courtesy copy/copies’ though. Some companies started using 'PC' instead of 'CC', where 'PC' stands for photocopy.

The 'CC' notation usually includes names of people to whom you distribute copies, sometimes you could include their addresses as well. 'CC' is typed at the end of the letter after enclosure notations or identification initials.

If you don’t want the addressee to know that a copy is being forwarded to a third party, use 'BCC' that can be shortened to 'BC' for blind (carbon or courtesy) copy. This notation appears on the office copy and the third-party copy only, not on the original. Dixie would like you to remember this very well: not sticking to this rule can put you in an embarrassing situation.

Read more about CC'ing on Dixie's Questions and Answers page.

Dixie would like to remind you that a postscript used to be a very important part of a letter. When people had to write their letters by hand or type them, the option of including an additional or even previously forgotten piece of information was very important. Nowadays it is usually considered that a postscript is not needed in a business letter, but as always with business correspondence there might be exceptions.

Postscripts are not needed any more for including a forgotten piece of information as the whole letter can be easily edited for that purpose. They still can be used to add a more informal, personalized touch to a formal communication. Contemporary sales letters use them as a common tactic, implying that the writer has an additional reason for the customer to buy the product. Postscripts are also common in medical letters.

For the above reasons Dixie decided to list the postscript among business letter elements. It is introduced in the letter with the abbreviation "P.S." If you would like to include more than one postscript, the second one will be "P.P.S" and the third one, "P.P.P.S." Dixie’s advice is never to use more than three of them in a letter. Note that the postscript closes the letter; it comes after identification initials, enclosure(s) and CC.