Business email has in it some features of each previously known type of business correspondence (Dixie means here business letters, memos and faxes) and at the same time it's something absolutely unique. 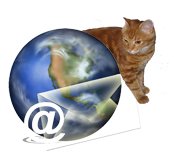 Dixie is Fascinated by Email

Email is a combination of informal speech (even in business), formal written communication and instant delivery. Before email only the fax has been a type of business correspondence capable of delivering itself, but email delivers the message quicker and easier. No wonder faxing is often being substituted by sending email, and after the appearance of faxing via computer email has been practically merging with faxing (or rather absorbing it).

According to a 2006 study by the Radicati Group, Inc. there are over 1.1 billion email users in the world, with nearly 1.4 billion active accounts. Worldwide email traffic per day totals about 171 billion messages. Well, not all of these accounts are used for sending business emails (naturally), and out of 171 billion messages a day about 71% are spam (what a waste!), but this study does demonstrate how email is reigning the world of correspondence.

The Radicati Group, Inc. has released a new study in August 2008 according to which the number of worldwide email users is projected to increase from 1.3 billion in 2008 to almost 1.8 billion by 2012. Worldwide email traffic will total 210 billion messages per day in 2008. By 2012, this figure will almost double to 419 billion messages per day. In 2008, 63% of all traffic will be consumer, and 37% will be corporate email messages.

Email traffic continues to rise dramatically showing no signs of abating. Dixie thinks that the increase from 1.1 billion in 2006 to 1.3 billion in 2008 is something to reckon with.


Is Email the Best Thing Since Sliced Bread?

Email has become so popular because it allows for almost instant communication and from the very beginning it looked like a great alternative to the previously known types of business correspondence: letters, memos and even faxes. But Dixie wants to warn you that this ability of email to be delivered instantly can start working against you if you are not careful because it provokes the feeling of urgency in us and most of us feel obliged to respond to the email messages as soon as they are received.

Having said that, Dixie thinks that some of you could argue this point stating that this doesn’t sound all that bad. Well, maybe it didn’t when email just appeared. About ten years ago nobody could have predicted that an average office employee would get about 200-300 and sometimes even more email messages a day. Try replying to all of those instantly!!! Dixie dares you.

According to the Daily Mail, “Researchers found that the average employee does just four hours of productive work a day. The remaining four hours are spent fielding unnecessary phone calls and emails, or wasting time by surfing the Internet and gossiping.” So at least one hour a day that hypothetical average employee spends dealing with email (Dixie won't go into detail on whether that time spent on email is business related).

Extreme problems require extreme solutions and some experts even suggest that the best solution is to stop using email altogether. Well, Dixie thinks this is a little too much. So, if you are not ready for drastic measures Dixie urges you to read the article that suggests 13 strategies for optimizing email in order to stay productive, not busy written by an expert at helping entrepreneurs and business leaders achieve breakthrough results through strategic business development.


Are We Becoming Addicted to Email?

During June 11-18, 2008 AOL Mail, in partnership with Beta Research, conducted an online survey of 4,000 email users ages 13 and older in the top-20 U.S. markets to measure email usage. It's actually the fourth Annual Email Addiction Survey conducted by AOL Mail. It reveals that more Americans are checking email while driving, in the bathroom, on vacation, in church. Some do it at 3 a.m.... again.

Dixie does find some of the survey findings surprising, to say the least. We shouldn't allow email to rule our lives! It's a very useful tool, let's use it to our advantage.

Due to its capability of being instantly delivered we often tend to treat email as something close to conversation, and even informal conversation. Dixie could even agree that it is an inherent feature of the email. But remember, we are talking about business email here. Nobody would argue with Dixie if she said that speaking to a boss was very different from chatting with a buddy.

So, the number one rule for using business email is: remember who you are communicating with through your email message! Treat business email with the same respect as any business letter or business document you write because ultimately that's what it is and most of the rules of business writing apply!

You might wonder which of the two is more correct. Even Dixie uses both spellings on this site, the reason being that nowadays they are used almost interchangeably, especially on the net. In most of the books though you would rather see the word spelled like 'e-mail', which is understandable given that some time in the very beginning of the email era 'email' used to mean 'electronic mail'. You do remember it, don't you?! The use of the hyphen was justified at that time, Dixie would say.

And of course we still use the 'e-mail' version, but the simplified way of putting it is also ubiquitous now. Dixie hopes in the end it will become a standard as in her opinion, 'the simpler is always the better'.

Some recent studies show it's easier to lie or be rude in email than on paper. Looks like email's perceived anonymity can bring out the worst in us.

The Gmail Labs team has recently announced a new feature: Gmail Offline. You now can catch up on email while offline, even with no Internet connection.

Does checking your email at 3 a.m. sound strange? Check out the findings of the fourth Annual Email Addiction Survey conducted by AOL Mail for some other email related idiosyncrasies.